There are several very exciting projects that are aiming to make more sustainable consumer electronics:

Such projects have inspired me to put together my own "modular" laptop, with parts that are easily replaced. I'm very fond of the Raspberry Pi computers (henceforth referred to as RPi, RPis plural), which are cheap single-board computers that are made to be tinkered with. One of my RPis is the RPi 4, with 8GB RAM, which is the most powerful RPi available to date. I wanted to use this one to make a laptop with the following requirements:

In addition to the RPi itself, I needed the following parts:

For the display, I ended up with the official Raspberry Pi Touch Display 7". The size was about what I had in mind for a portable computer, and I was also lucky enough to find someone who sold a used one for a cheaper price.

I also found someone who sold a used Logitech K400, which is a keyboard with an integrated touch pad. I didn't really want a separate mouse for my RPi laptop, so this was perfect.

For portable power supply, I just use plain powerbanks. I know that one should preferably use a something that reliably supplies the exact voltage that the RPi needs, but I find that powerbanks works just fine in most cases. For some very small powerbanks, I somtetimes get the "low voltage" warning on the RPi, but apart from that, it works flawlessly.

The hardest part was binding all the parts together in a package that can easily be carried around. I didn't want to have several separate parts that I need to pick up in order to move the laptop. After a lot of experimenting, I found a adequate solution by using adhesive GoPro mounts and some extra arm joints. I put one adhesive mount on the keyboard, and one on the display case. I connected these by using arm joints (one of them needs to be slightly modified by cutting of one of the plates). The powerbank can be fastened to the "display foot" using an elastic band or similar, or to the keyboard.

The result is a portable computer (I call it a laptop, since it's a computer I can have on my lap, but I'm not sure if everyone agrees with me), with parts that are very easy to get hold off. 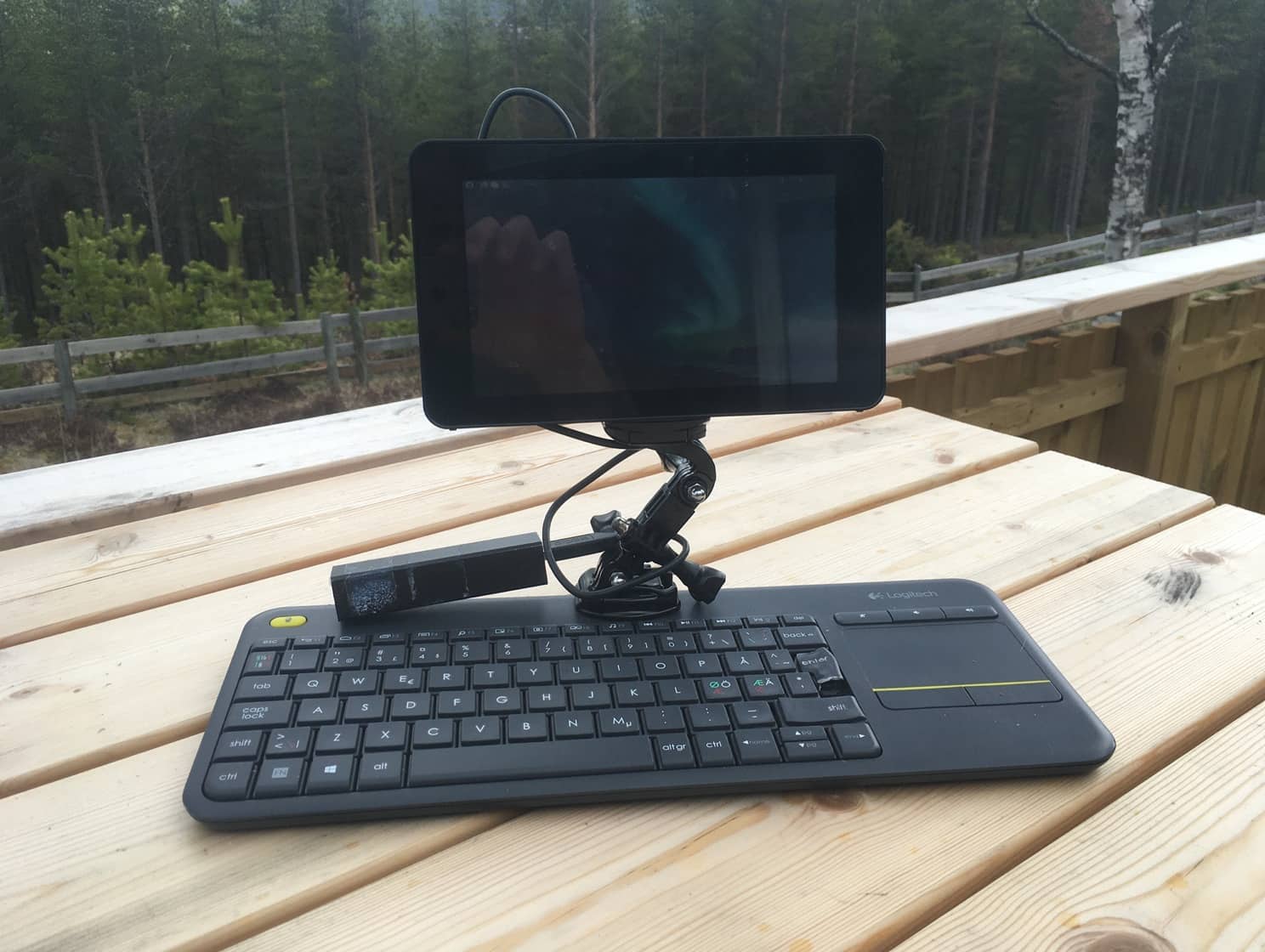 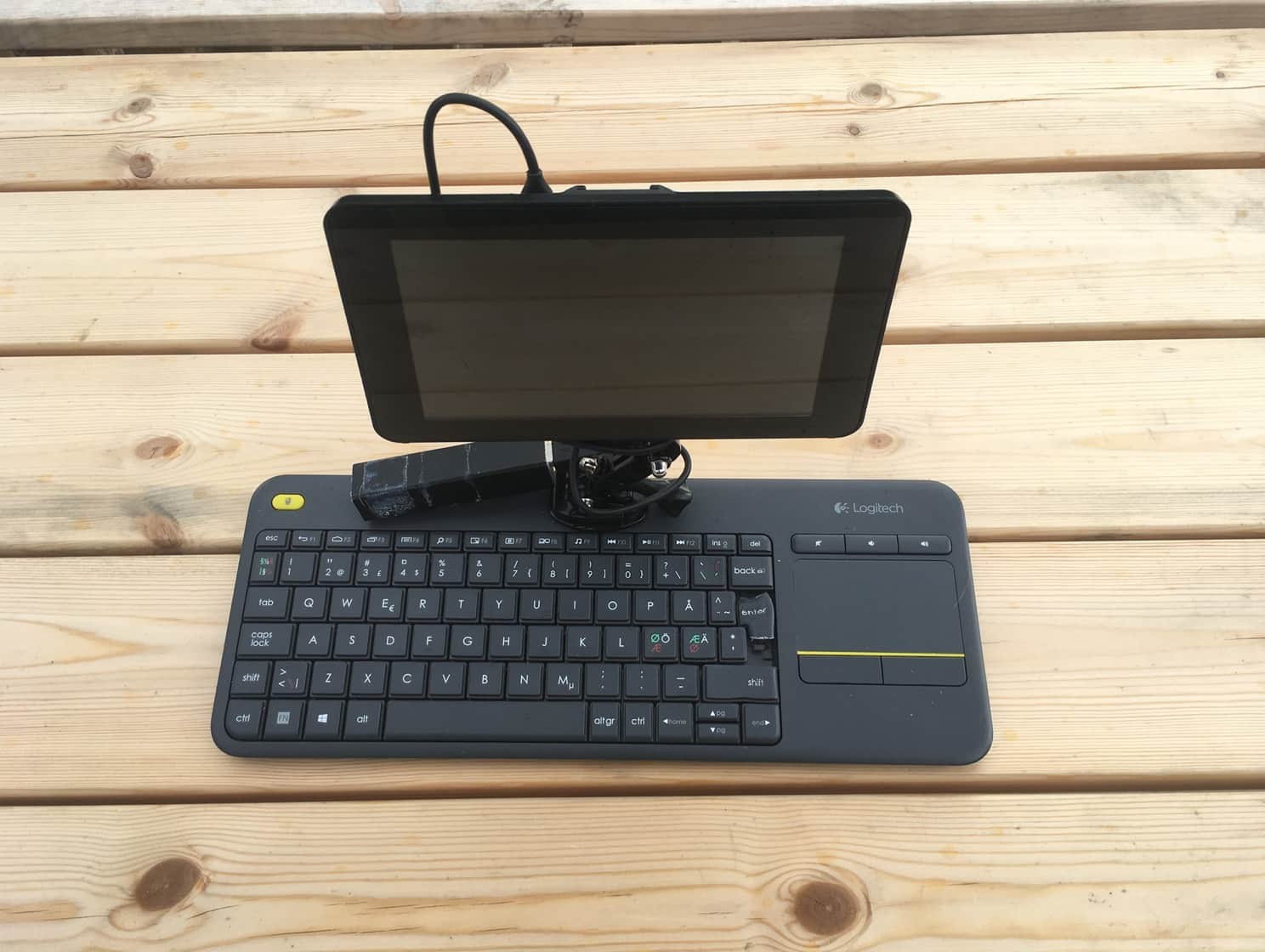 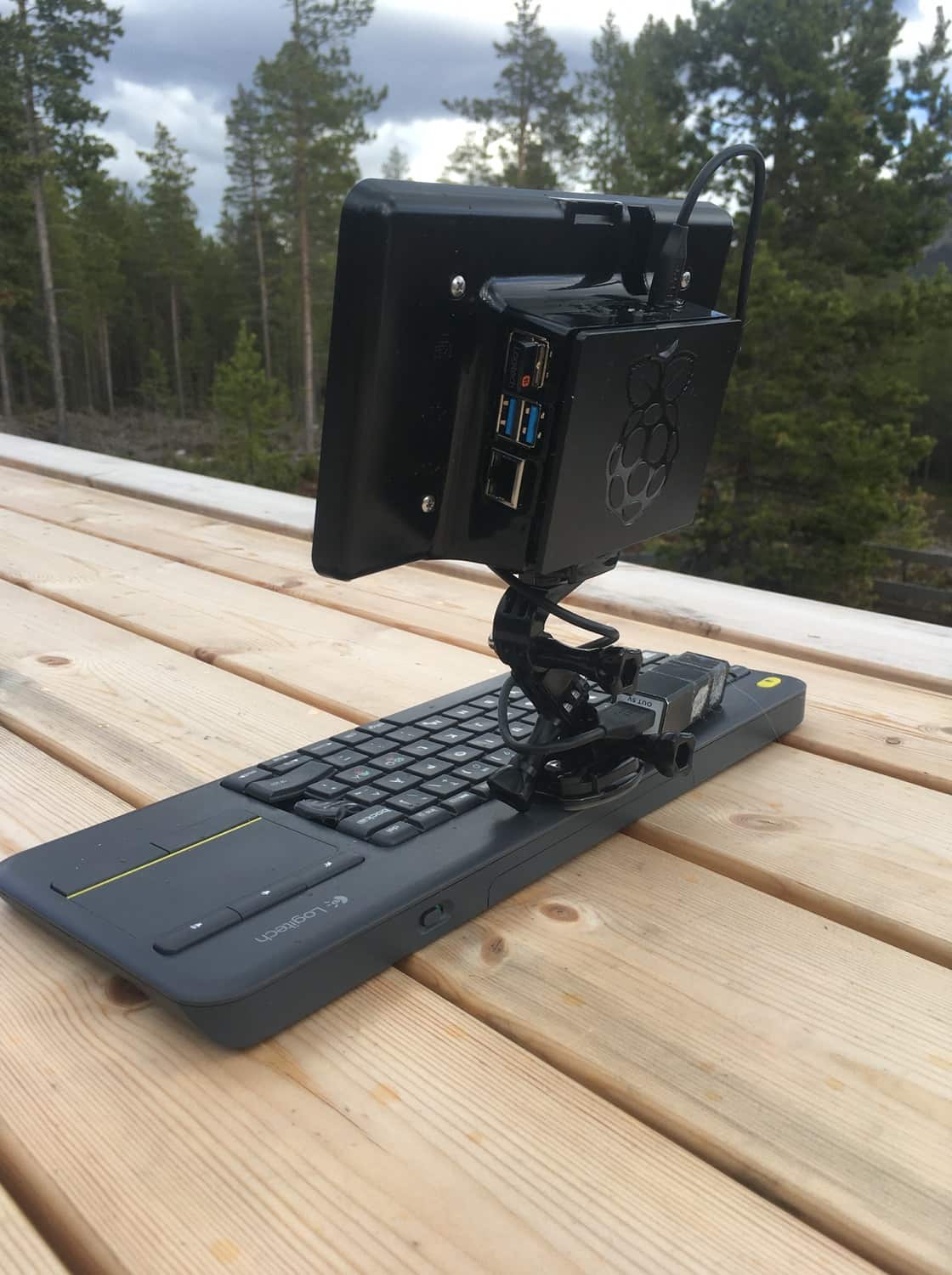 I cut off a part of the display case in order to easily swap memory cards (which I do frequently, since I like to use different types of Linux operating systems). 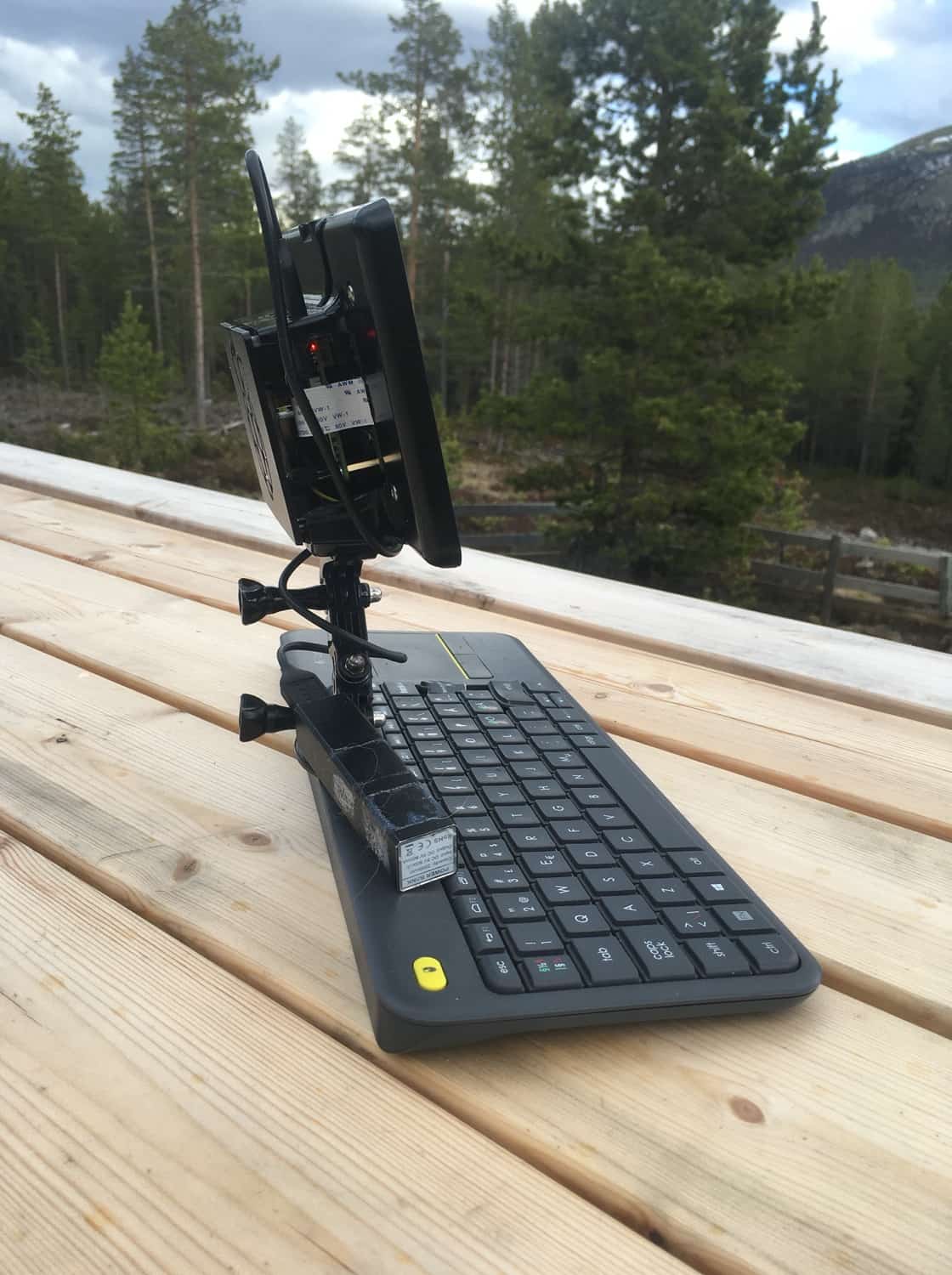 A small part of the display case is cut off, in order to easily access the memory card that the OS is stored on. 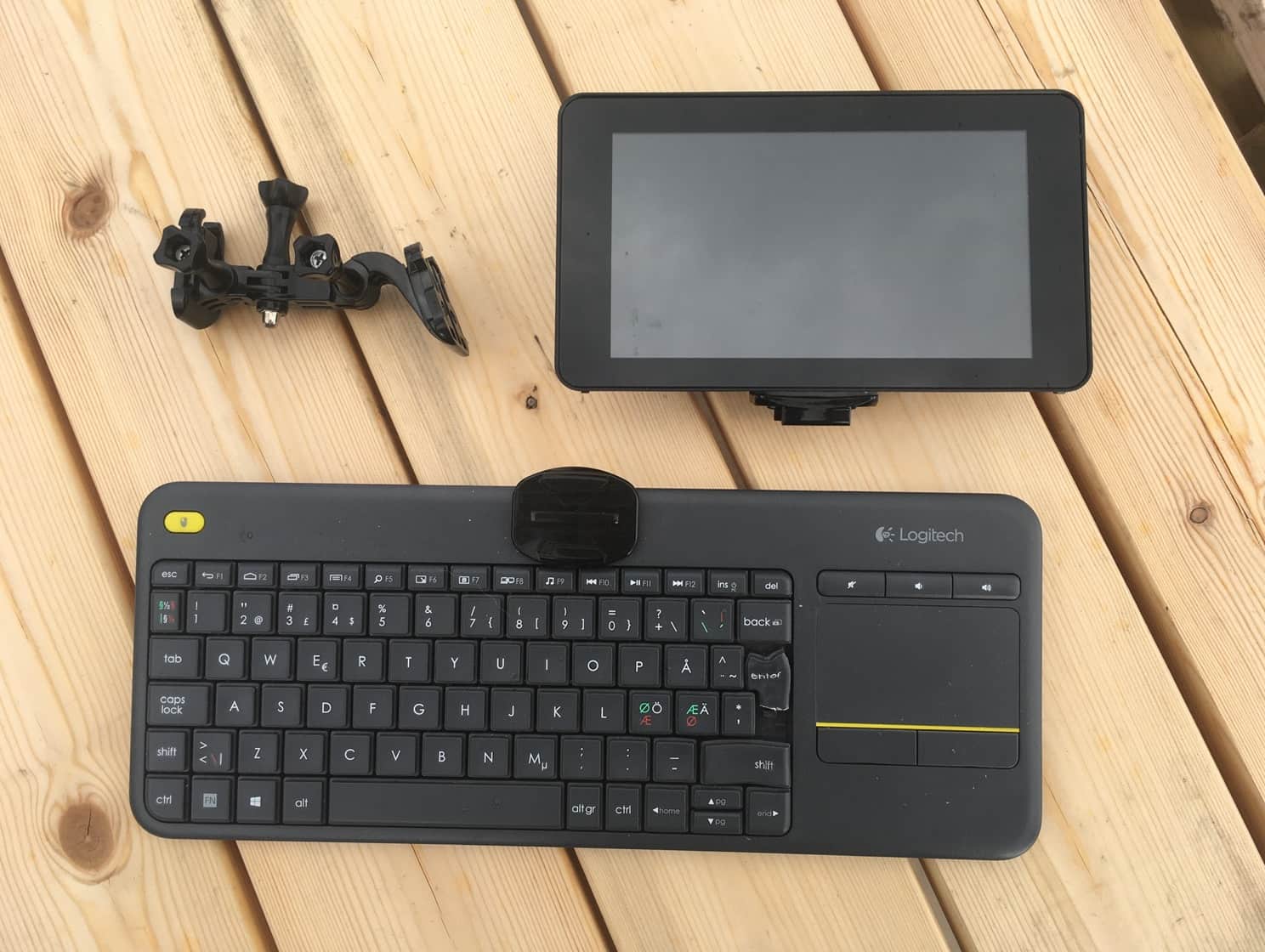 The laptop can easily be disassembled into these parts.

As a bonus, the computer can be mounted on other things that have a GoPro mount on them. I have a strong clip with a mount on it, which enables me to attach the computer at the edge of a table or similar. This is very useful when I want to watch the display when I'm cooking or washing the dishes.

The computer and display mounted on a clip instead of the keyboard. Saves desktop space.

The RPi isn't the most powerful computer in the world, but it can handle a lot of day-to-day stuff, like text editing, internet browsing, watching videos, playing games, listening to music etc. I have used mine a lot, and one of the best things with it is that I don't have to be afraid of breaking it, since I know that all the parts, even the main board itself, is quite cheap to replace.