A project I have wanted to for a long time is setting up an "offline Internet", or "Internet-in-a-box", which is an offline "library" and a wireless access point that nearby devices can connect to. To do this I used a Raspberry Pi 4 with the official Raspberry Pi OS installed.

The main steps in creating this "Internet-in-a-box" is:

I assume that the operating system already is installed on the Raspberry Pi (or any similar device).

Scroll down to the bottom of the post to see screenshots from the offline Internet!

Many types of static content (HTML, plain text, pictures etc) can be served from the Raspberry Pi. For me, the most useful content is this:

I use two different ways of serving the content wirelessly to other devices, one for the .zim-files, and another one for other file types.

For serving .zim-files, I use software called Kiwix. First I download Kiwix from this link (if you use a Raspberry Pi like me, choose the version called "GNU/Linux ARM 32-bits"). Unpack the zipped file with

Your version number might be different though. The contents are unpacked to a folder with the same name as the zipped file. I rename this folder kiwix to make things easier, and then move all my downloaded .zim-files to this folder. If you for example download a file called wikipedia.zom and another file called gutenberg.zim, the folder should look like

First you need to make a library containing your .zim-files:

This library can now be served by running:

For all other file formats I use a Python webserver to serve the content (which of course requires that you have Python installed on your system). This simply means that I run the following command in the folder containing the files I want to serve:

In this case I have chosen to serve on port 8081, but this can be any other port (if you omit the port number, it will be set to 8000) as long it's not the same as the other servers you have set up.

In order to make the file serving start automatically when I boot the Pi, I simply add cronjobs. Add cronjobs by editing the crontab file:

Add the following files to the bottom:

Now these commands will run every time you boot up the Pi.

Setting up the Pi to broadcast its own WiFi-network

(The instructions in this section were found in the Raspberry Pi documentation for using the Pi as a routed wireless access point).

After the content is ready to be served from the Pi, one has to make the Pi broadcast its own WiFi. By doing this, any device nearby can connect to the WiFi and access the Pi's content. If you already have a router that all your devices are connected to (including the Pi), you can skip this step.

I used the below commands to make the Raspberry Pi broadcast its own WiFi network.

Enable the accesspoint service and make it start on boot:

After installing the software above, I edited the configuration file for dhcpcd:

These lines were added to the end:

The Pi will be reachable in the IP address 192.168.4.1 after the setup process is complete, and you are connected to the WiFi of the Pi.

Then I created the hostapd configuration file:

In my case, <COUNTRY CODE> was NO because I live in Norway, and one also have to fill in a name for the network and password.

After a reboot (sudo systemctl reboot) the Raspberry Pi will broadcast its own WiFi network, and you can connect to it using the name and password specified in the hostapd.conf file.

After these tree steps are done, you can connect to the Pi's network using WiFi, and access the content on 192.168.4.1:8080 or any other port number that you have chosen to serve your files on. I find this useful both to limit data usage, but also because I like to work offline if I do not strictly need to do specific things online. 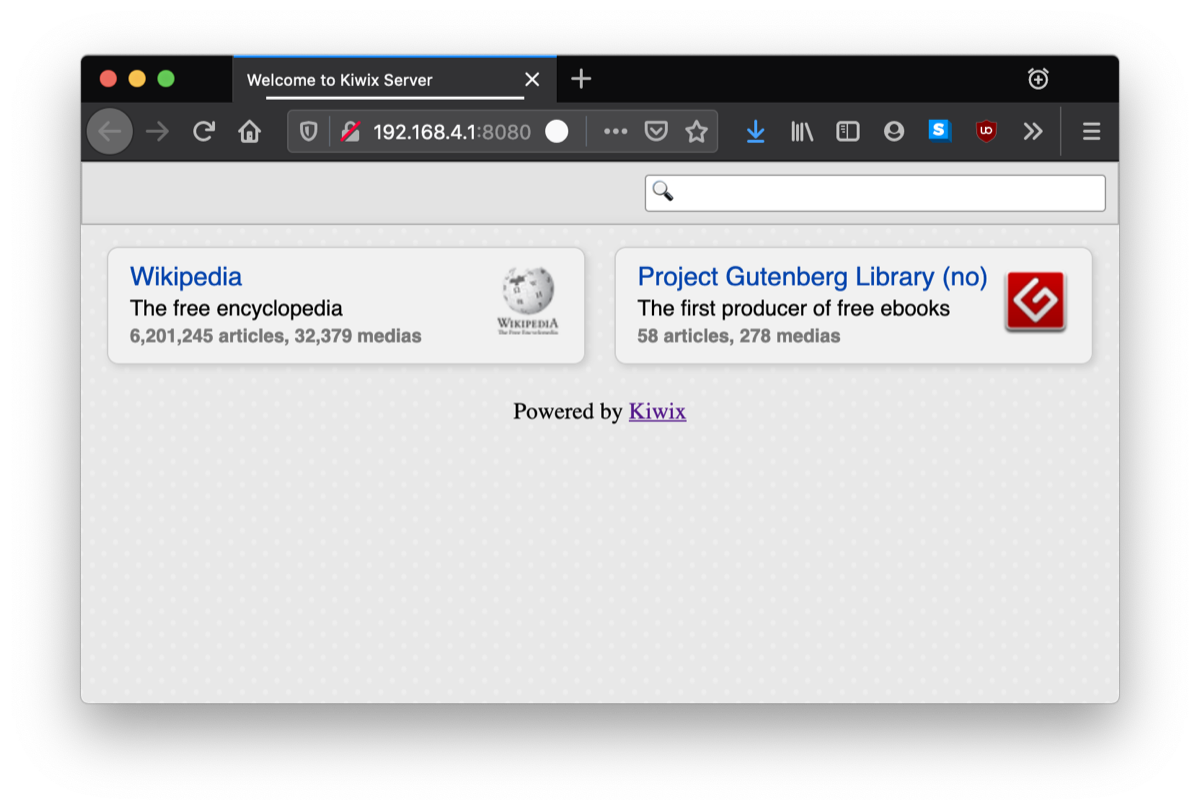